Daisy was so tiny when I first saw her. They has taken her from her mother too soon, and not cared for her.

It was Dave’s idea to get a dog for my birthday. He asked me what I thought and I liked the idea very much. So, we had driven to this house listed in a classified newspaper ad for “Lab/German Shorthair mix puppies, $50.”

When we first saw her, she lay on the floor in a rough shower stall in the basement. The floor was concrete, cold and hard, and not improved by the thin, damp newspaper that covered it.  She was limply splayed across it. Her few remaining brothers huddled apart from her in the corner of the stall.

I immediately thought, “My God, we have got to get her out of here.”

I picked her up and held her. I saw her belly was much too swollen and too many fleas crawled over and under the shiny, soft hairs of her black coat. She was breathing shallowly and did not open her eyes.

I thought, “Sweet Jesus, I hope we’re not too late.”

We went upstairs to pay for the dog and were led to the dining room. The man at the table had disassembled a handgun and was cleaning the parts on the dining room table. Dave told me later that the man made it clear to him that there were no refunds, and it was only much later that I considered if this had also been a symbolic message from a negligent, unlicensed dogbreeder to customers who might be concerned about the condition of the dogs. The house was located in a rough-enough neighborhood where symbolic displays still carried some weight. But, in my generalized state of ignorance at the time, I did not even realize that dog breeders are (or should be) licensed and could be reported for treating their dogs so poorly.

At the time, upstairs in the dining room, I was not thinking about any of this. I was still reeling from seeing the puppies in the basement. I slowly became aware of my immediate surroundings and my eyes came to focus on the dog cowering against the wall. This was the mother, a full black lab, standing off to the side but watching everything. Her teats hung visible and heavy—they looked painful with too much milk. This I all noticed in the glance of a single moment, but what held me was her eyes.

The mother dog was staring intently at me as I stood there, cradling her tiny black puppy in my arms. She did not move but her eyes were saying, were shouting to me, “Please get my baby out of here. It is too late for me. This is a terrible, horrible place.”  I held the mother dog’s gaze, and thought to her, “Okay, we will. And I promise we will do our best for her.”

Dave paid the man at the table the $50. Few words were exchanged. We left the house from the side door that had led down to the basement and walked to our car parked on the side of the street. I carefully climbed into the passenger seat, trying not to alarm or startle the little dog in my arms. She was barely there. In the car I cradled her as she lay in my lap, tiny and dark, breathing but hardly moving.

From the first time I saw her in on the basement floor I cared deeply for her, in spite of, perhaps even more so because of, her difficulties. As I gently caressed her in the car on the way home, I knew that her name was “Daisy.”

When we got back to the house, I wrapped the dog in a soft blanket and gently put her on the floor in the kitchen. Her eyes were now open but she did not seem to respond. I ran my hand back and forth in front of her face, slowly at first and then faster and faster. She gave no reaction, did not even flinch.

I thought, “Holy-Mary-Mother-of-God, I hope she isn't blind.”

I talked to Daisy and stroked her and she seemed to relax. She fell asleep in the blanket on the kitchen floor, as the sun went down and the apartment darkened.

When Daisy woke up after a deep sleep, her eyes came to focus and Daisy responded. The sun came up the next day, and Daisy came to with the warm sunbeams that streamed in through the kitchen windows.

We took her to the vet--and then later to the park and the river, the lake and the woods. For rides in the car and walks around the block. Daisy got stronger and healthier with each passing day, and came to see things more clearly than perhaps anyone else I have had the good fortune to know. 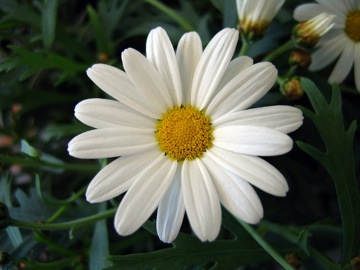 Loading...
My Little Underground
The Jesus And Mary Chain (Psychocandy)
0:00/2:31