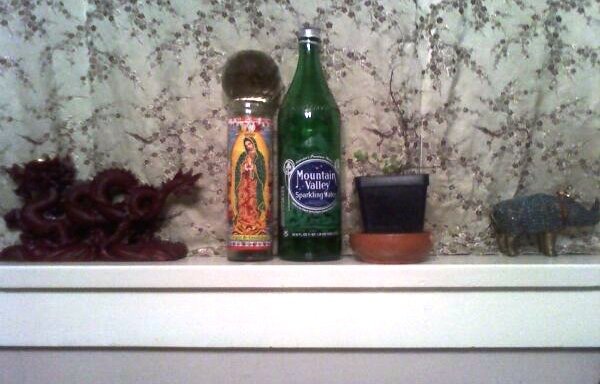 ...  I had a confrontation with a cockroach last night that I wanted to tell you about. But it’s not gross or scary, so you can relax and enjoy it without waiting for “that” part.

So, I usually don’t eat before sleeping but I was watching TV and had just bought some delicious local honey at the store that day. The magnolia trees are in bloom here. They have been for a few weeks and the magnolia flowers with their huge white blossoms give off an intoxicatingly heavy, sweet smell that hangs in the air around the trees and occasionally turns up in a breeze as you walk down the street.

I regularly buy this “RAW HONEY” sold by “Jay Martin, beekeeper” with a New Orleans city address on the label. The latest jar I just bought tasted different, with a strong, almost skunky-like new flavor, and I tasted it again to try to figure it out. I soon realized the new flavor in the honey is magnolia, from the magnolia blossoms the bees have been pollinating for a few weeks now.

This newly purchased honey inspired me to have a late-night snack with plain yogurt and raw walnuts. I have been avoiding late night snacks and getting to bed early for a while, and so the kitchen area has usually been long-abandoned and completely dark by this 11pm time.

I get up from my bed, go into the kitchen, get out a small glass and put it on the counter top—on top of the transparent cutting board that overlays an image of the Zodiac Wheel, with all the sign symbols, pictures and zodiac names. The cutting board is embedded in the kitchen counter top and must have been installed in the 1950s when the house was built, and how cool is that? I love it. 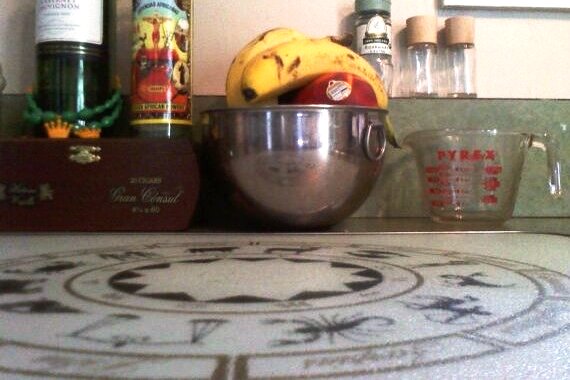 Anyway—I spoon some plain yogurt in, toss in some nuts, and turn around to get the honey. Well, the glass is small and the yogurt is spilling over the sides a bit, and as I turn back to the counter with the honey in hand I see a big, fat cockroach rearing up against the side of the glass (in the Deep South they may call the biggest ones “palmetto bugs”, but make no mistake about it, they are cockroaches, and massive ones at that).

Now, I realize that cockroaches exist in the house, although I don’t often see them. After all, we are in Louisiana and this house is not exactly sealed tight. But usually when I see a cockroach, it is belly-up, legs folded. And if I do encounter a live one, they either freeze or run.

But last night, as I turned back to the kitchen counter with the honey in hand, I see this huge cockroach retreating from the glass of yogurt. And as I was turning, out of the corner of my eye, I had seen that it was standing up on its hind legs—flailing its antennae and swiping its front legs to get at the yogurt spilling over the top edge of the glass—before having turned and skittered away. And all of this, the entire cycle, occurring one of those cockroach-split-seconds in which they reveal their remarkable capacity for agility and speed.

In any case, it scurries away from the glass and backs into the kitchen counter top lineup that includes an aluminum mixing bowl, glass Pyrex measuring cups, a scrolled metal basket with tea boxes stacked inside, the wooden spice box, and a large bottle of olive oil.

From there, the cockroach turns his body around to face me and rears up on his hind legs, nonverbally tongue-lashing me with flailing front arms and antennae.  From this posture of defiance, he soon breaks into a brief horizontal skitter, but it is resumed when he finds a more guarded and secure spot. Now safely nested between the aluminum mixing bowl and spice box, he quickly returns to his confrontational posture, reared-up-on-hind-legs, face-on, defiant, antennae lashing out at me: j’accusé.

I was startled, and also surprised by the boldness and indignation of this big fellow. I soon realized, though, that we had so thoroughly established our “shifts” in the kitchen that, according the cockroach, I had broken our apparently unspoken arrangement.  I guess the cockroach figured that whatever was on the kitchen counter at 11pm was as much—if not more—his as it was mine. Excusez-moi, Monsieur Coquerelle.

Well, I made away with the yogurt, and he made away with his life. Lucky for him the cockroach killer was asleep for the night, and the counter top is no place for a crunchy/squishy “palmetto bug” death in any case. (My personal aversion to killing cockroaches comes not from any moral qualms, but rather from physical ones.) I did make sure to bang up the counter top items on the way out of the kitchen, though, just to shake him up a bit and stake my own claim to the kitchen territory. 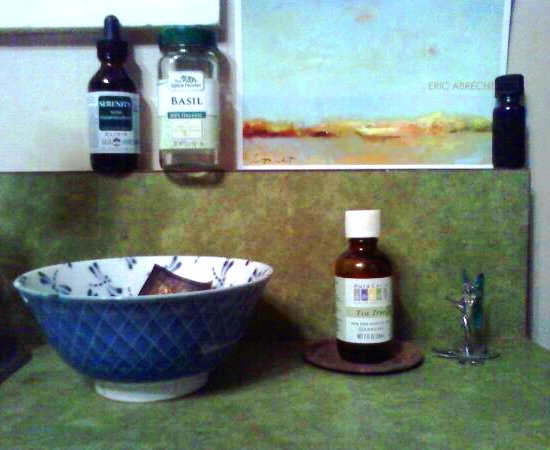