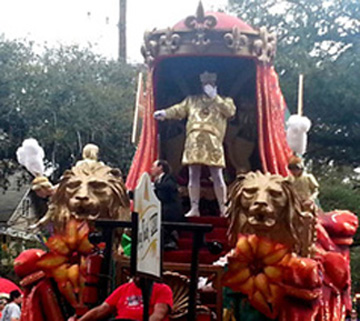 It is 11:38 a.m. and I am sitting in my kitchen patio enjoying the sounds of the Metairie Mardi Gras Day parades. This muted combination of sounds wafts over the houses in the neighborhood and weaves in through the windows of my house and through the open kitchen doors: connecting the inside of the house to the outside porch and the backyard; the fresh air and the breezes; the clouds and the sky.

These parade sounds include a lilting background of cheering voices woven together with music from marching bands, brass bands, and from float speakers: old-school Mardi Gras classics by Dizzy Gillespie and Louis Armstrong interspersed with popular rap songs--and punctuated with an occasional riffed brass horn accent thrown out by an enthusiastic band member; or an official vehicle siren clicked on-and-off in an encouraging burst of brief whoops; or a string of celebratory horn-beepings sent by parade vehicle drivers to parade-goers on the sidewalks and sidewalk bleachers set up specially for the occasion. 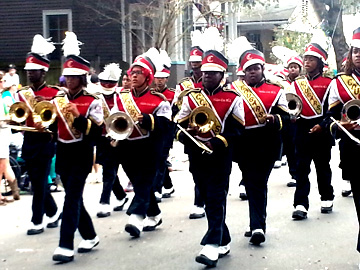 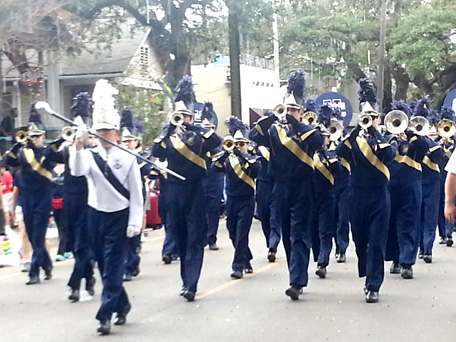 In addition to the parade sounds in the distance, the radio brings the music of WWOZ community radio (the funkiest station in the nation) into the house. A small sampling of today's lineup includes brass bands (Rebirth!), Mardi Gras Indian music (The Wild Magnolias), and the distinctive New Orleans sound of Dr. John and Professor Longhair--with that irresistible rhythm that has a full-circle twist in every beat--and deep south blues from the likes of Son House, Junior Kimbrough, and local legends like Koko Taylor and Irma Thomas.

The porch doors are also open to fill the house with the sweet scents of a semi-tropical spring, tossed about and circulating freely in the brisk winds today.  I'm especially aware of this smell since returning last night after a brief trip to Arizona.  The early blooming flowers have emerged around the neighborhood in the past weeks and taken-things-to-the-next-level with the assistance of the rain that fell while I was away.

I also suspect that spending a few days in the arid and relatively un-fragrant Arizona desert climate heightens my awareness of the rich fragrances that emerge here as soon as winter even starts to think about ending--beginning with the smaller plants around this time of year, and increasing in intensity as the flowering trees and bushes that grace the Deep South begin a series of blooming cycles that will end only when the chill of winter begins: the first-to-bloom Japanese cherry tree, and the Camilla bush blossoms, and the blossoms of the signature magnolia tree with its distinct pattern of stature and appearance; its unique way of holding itself and hanging its leaves and moving in the wind; and a scent that you could never forget if ever you had felt it deeply, ever allowed yourself to surrender to even a single instance of the magnolia tree and be carried by its spirit--even if once and only for a moment.

So, for the first time this year, the smell of the blossoms is strong enough to be carried in the air and circulated in the still-cool spring breezes near the ground. Clouds stream rapidly far above, carried by larger and more aggressive winds in the atmosphere, and down below the combined scent of all the blooming flowers is perceptible to any who care to breathe in deeply.

The winds rise and fall, asking the tree branches to dance and they accept, leaves shimmering with delight.  Through the kitchen window I see the occasional solitary leaf breaking away from its tree and drifting down past the houses, sometimes alone but more often followed by others--nature sending "second-line" parades down streets and sidewalks on a day without sunshine, a day that threatens to rain but will not, holding off even thunder until the afternoon when the 2011 Mardi Gras parades will have safely wound down. The three weeks of celebration that built up to it will have come to an end. Tomorrow morning, it will be Ash Wednesday and--except for the beads caught up in tree branches en route--you will be hard-pressed to find trace that the whole spectacular series of events had even happened.

Loading...
My Little Underground
The Jesus And Mary Chain (Psychocandy)
0:00/2:31